The New Jersey Division of Gaming Enforcement (NJDGE) has given the all clear to Australian betting firm PointsBet to begin a soft launch in the Garden State. Yesterday, the NJDGE approved PointsBet to operate on a limited basis for the next few days as the site and regulators ensure everything runs smoothly before going to a full launch.

Past soft launches for other NJ betting sites have tended to last just a few days, so it’s possible we’ll see PointsBet fully up and running early next week as long as everything runs as expected in the meantime.

PointsBet will become the ninth mobile sportsbook in New Jersey, but the first of its kind to launch anywhere in the US. While PointsBet will still offer a standard assortment of traditional sports bets, it also offers a unique form of spread betting in which wins and losses are magnified by how close the game’s final results are to the predicted outcome.

PointsBet Stands Out Among the Competition

Despite being just the latest of numerous betting sites to enter the New Jersey market in recent months, PointsBet is in a good place to shake things up with its own take on sports betting. In addition to offering a full complement of fixed-odds sports wagers, PointsBet stands out from the crowd with its spread betting format that is unlike anything else on the market today.

The PointsBet format is called spread betting (not to be mistaken for point spreads) is modeled after financial spread bets that have achieved some popularity in European markets. The basic idea with spread betting is that you don’t just try to predict the outcome, but you try to pick the outcome accurately.

The simplest example of a PointsBet wager in action is a bet on the total (over/under). Let’s say PointsBet.com has an over/under wager on tonight’s Philadelphia 76ers vs. Brooklyn Nets game set at 220 points and you want to take the over.

In a normal fixed-odds wager, this is where you’d simply choose your bet and then hope the total goes over. In that case, you would know ahead of time exactly how much you stand to win or lose, and there would only be those two outcomes.

A PointsBet wager, on the other hand, works differently. In this case, you’ve taken the over at 220 points and now choose how much to wager per point. Your bet is not going to be a simple win or loss scenario; you’re going to win or lose money based on how far above or below the actual total goes relative to 220.

For instance, let’s say you bet $1 per point and the game ends with a final total of 240 points. You chose correctly and are now paid $1 per point above the predicted total for a total payout of $20 (20 points over the total at $1 per point).

The higher the actual total, the more you stand to win after betting on the over.

The flip side to this is you could also lose more money than you originally wagered. Let’s say you again take the over at $1 per point, but this time the game’s actual total ends up being just 200 points. In this case, you would lose $1 per point that you came up short, which would work out to $20.

If you find the prospect of winning or losing more than your original wager a bit scary, you can take comfort in knowing PointsBet does allow you to set loss limits. Setting a loss limit also puts a cap on your potential winnings, but it does give you some control over how much you’re willing to risk.

In fact, loss limits are required before placing all wagers. PointsBet does not accept wagers with infinite loss and reward. After you select a wager, the betting slip that asks you to choose your bet size will also have you set a limit.

Below is a screenshot from PointsBet showing how that works. You can see below that I’ve set a wager of $1 per point and have set my stop loss at 20x. This means the most I can lose is $20 and the most I can win is $18 (which obviously gives the sportsbook an advantage, but at least I know I can’t lose more than $20 on this bet). 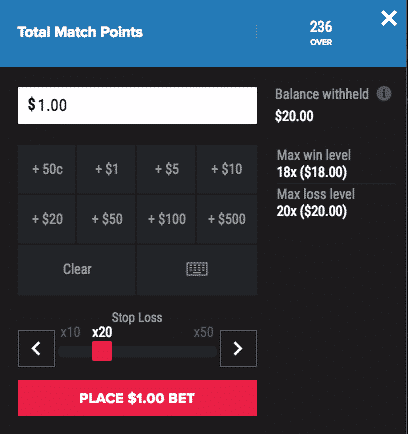 How PointsBet Came to the USA

PointsBet announced back in July that it had reached an agreement with Meadowlands Racetrack in East Rutherford to run a mobile sportsbook under its own name. Meadowlands will supply the required land-based gaming license while PointsBet will supply the brand name and technology behind the operation.

The firm got its start in the Australian market, but PointsBet CEO Sam Swanell explained in July that their eye has always been on entering the United States. There were some questions at the time regarding what New Jersey regulators would think of the spread betting model, but it’s clear now the NJDGE has given PointsBet the green-light to give its business a test run in anticipation of an official launch.

Now, what remains to be seen is how appealing the new format is to US sports fans. The unique format definitely sounds intriguing and the idea of winning more for being right is compelling. However, even if the model is met with a lukewarm reception, PointsBet also offers a full range of regular wagers for every major sport of the world.