Boom Fantasy is a daily fantasy site that breaks from the traditional style of DFS in a big way by doing away with salary caps and lineups. Boom Fantasy contests are more like predictions contests in which you attempt to make better predictions of player performances than everyone else. 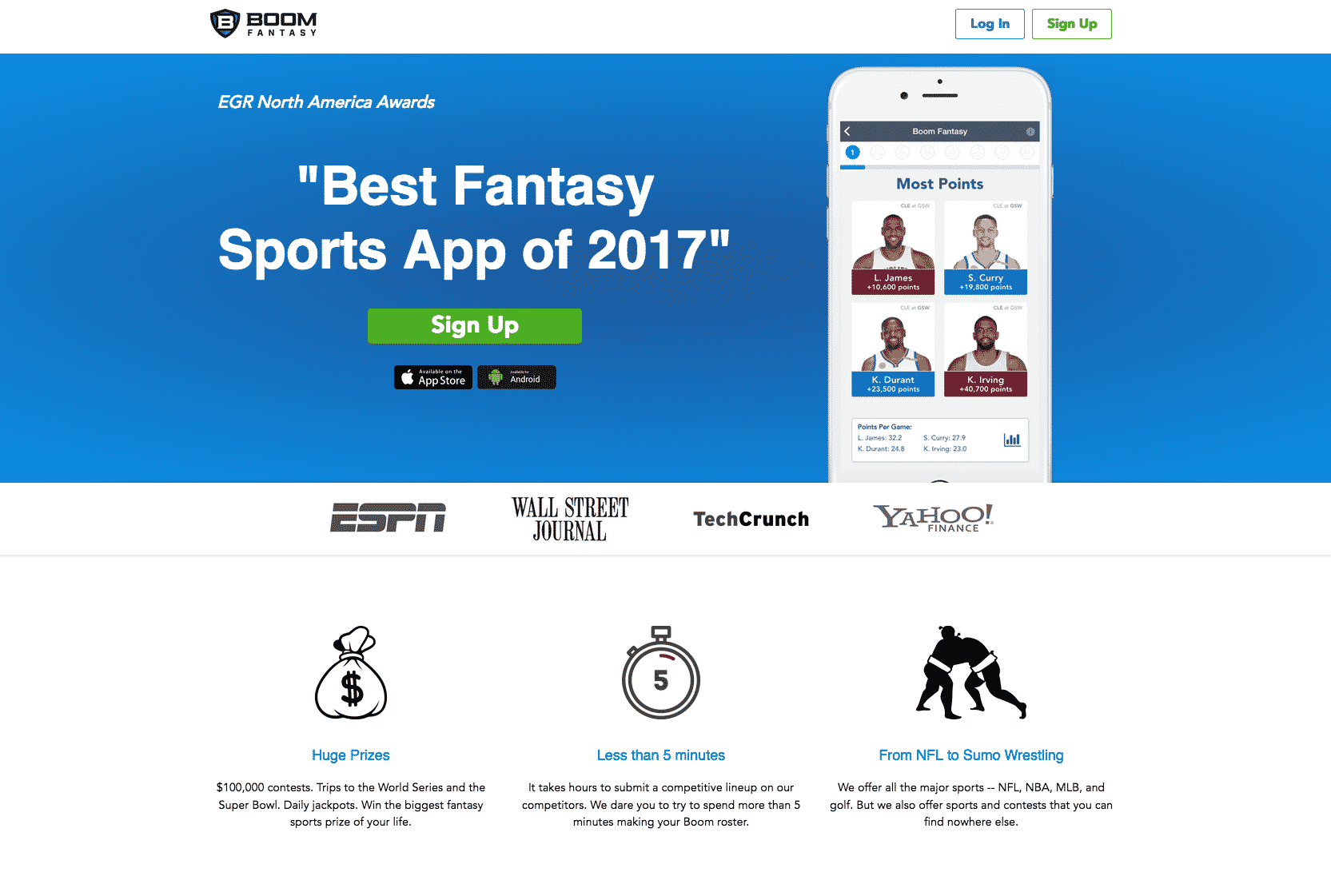 Boom Fantasy offers players fast-paced contests involving player predictions such as points scored, who will have the best day and more. This unique format is easy to understand but still leaves plenty of room for strategy. This is still one of the smaller fantasy sites, but the $100,000+ jackpot contests ensure there is always serious money to be won.

The end result is a DFS format that is vastly simpler and more inviting for new users. However, that does not mean no strategy is necessary to win money – winning still requires skill and a deep knowledge of your sport of choice.

And speaking of sports, Boom Fantasy offers a wider selection of sports than most other sites. Boom has all the primary sports you would expect – NFL, NBA, MLB and golf – but they also have some very niche sports such as sumo wrestling and others. However, contests for niche sports are still infrequent at this time.

Rather than having you draft lineups of players with a virtual salary, Boom Fantasy contests ask you a series of questions regarding the performances of players in upcoming games. For example, an NBA contest might ask you to predict which of four basketball players will score the most points in their next game.

Each contest consists of a series of 4-8 questions and your goal is always to make accurate predictions. Some questions are as simple as picking who will have the best game while other questions may ask you to input a point total for just one player.

The overall strategy is to make accurate predictions of course, but there are other things to keep in mind. Some of the potential answers to questions are riskier than others but give you more points for getting it right. If you pick someone who typically has a low-scoring game to score a bunch of points and you’re right, you will earn more points than someone who went with the safe pick.

When you attempt to pick point totals for players, you earn more for being closer. As you can see in the following screenshot, you earn 30,000 fantasy points if your prediction is within 1 point of LeBron James’ actual score in that game.

Correct and close answers earn you points for your contest and at the end of the contest, whoever has earned the most points for correct answers wins the contest and a payout. It is a simple concept, but it will still test your knowledge of the sport.

The following video from Boom Fantasy makes the case as to why they believe they are better than the competition:

One of the challenges faced by growing fantasy sites is attracting a customer base in order to build bigger prize pools and in turn attract more players. These early stages are tough for new fantasy sites, but Boom Fantasy has come out with a unique contest format that makes it possible to play for six-figure jackpots.

Boom Fantasy jackpot games are offered at three different buyin levels of $1, $2 or $3 with corresponding progressive jackpots starting at $100, $30,000 and $100,000. These jackpot games run just like normal fantasy contests as they have you make predictions across a series of questions. If you answer every question correctly, you win the top payout.

Progressive jackpots grow over time until someone wins the top prize. At that point, the jackpot resets and begins growing again.

In 2018, Boom Fantasy launched a new subset of predictions contests called Streaks that offer the possibility of turning your original buyin into a 10,000x payout. The way Streaks contests work is by asking you one question at a time, such as:

“Who will have the most rushing yards? Ezekiel Elliot, Saquon Barkley, Todd Gurley or David Johnson?”

If you answer the question correctly, you move on to the next step to answer a second question. If you progress all the way to step 8, you’ll be asked one final question related to predicting a specific stats total such as how many points a particular player will have in his next NBA game. In that particular example, you would need to be within 1 point of the correct total to get it right.

If you’re the first person to answer all eight questions correctly in a particular Streak contest, you’ll be paid a handsome reward. Boom Fantasy has plans to add more Streak contests in the future, but for right now here’s what they have:

Streaks also offer the option to quit at step 4 and again at step 6 for an immediate payout. Stopping here guarantees a payout, but you won’t be able to compete for the top prize once you have taken your early payout.

Here’s where you can cash out early at each Streak buyin level:

Boom Fantasy also hosts a Streaks marketplace where players can buy and sell active Streaks. For example, let’s say you make it to level 3 in a $2 Streak contest. You haven’t made it to step 4 for an early cashout, but you’re starting to feel like maybe now might be a good time to call it a day and get paid.

In that case, you can head to the marketplace and put your Streak for sale. Other people can then come in and bid on your active Streak, letting you sell it to the highest bidder. Sellers can also set “buy now” prices that immediately sell the Streak if someone is willing to pay that amount.

Likewise, you can bid on other people’s active Streaks if you’d like to get a head start. Perhaps you’d like to take a shot at the 10,000x payout or maybe just add to the streak a little before selling it again. Just head to the marketplace and submit bids on other peoples’ Streaks. You may also attach a message to any offer you make.

Boom Fantasy offers a 100% deposit bonus for all new customers and a VIP program to reward existing customers who stay active. As for the new customer bonus, you get a 100% bonus added to your first deposit for up to $200 in extra cash in addition to two free entries to $5 contests.

>>>Click here to claim your deposit bonus at Boom Fantasy<<<

Note that the Boom Fantasy bonus has changed recently. They offered 100% up to $600 in the past – that bonus has been scaled back to a maximum of $200. After you complete your first deposit, the bonus money will be released in $5 blocks at a rate of 3% of the entry fee of the paid contests you enter. You have 90 days to clear as much of the bonus as possible.

The VIP programs rewards players with points for participating in contests and being an active member. As you accumulate points, you can visit the VIP store to redeem them in exchange for a variety of prizes ranging from free contest entries to Boom Fantasy swag and even for a Porsche 718 Cayman (although you’ll be needing 504 million VIP points for that one).

Boom is a mobile-first fantasy site, but it does offer a desktop interface that you can find by logging in at Boomfantasy.com. The Boom Fantasy app is surprisingly well-done considering the newness of this site. The app feels like it was developed by a big budget fantasy operator, not by one still getting its feet in the industry.

The app is intuitive so that you can usually find what you want at a glance. When you log in, you are taken to the main “featured contests” page which shows a list of big prize pool contests and others that have attracted significant numbers of entries. If you’re looking for action, the start page is a good place to find it.

You can select game types and sports from a menu that runs across the top of the screen. Here, you can view jackpot games, switch between sports and view contests that are open for business. The bottom of the screen contains additional menu options for seeing upcoming contests you have registered for, your active contests, group chat and your profile area.

Group chat is an especially interesting feature that allows you to interact with not only other users, but also support personnel. I joined the group chat area randomly while writing this review and saw actual players chatting, support people answering questions and some kind of automated chat bot publishing sports news snippets.

Here’s how the mobile app looks in action:

The desktop version isn’t quite as developed as the mobile interface and it’s clear Boom Fantasy is currently focusing most of its attention on the app. There are a few quirks with the desktop site such as the extra-wide design and issues with pop-up pointers that tend to reappear after closing. Overall, the desktop website looks and functions well enough, but it is not quite up to par with the Boom Fantasy app.

Here are a few screenshots from the desktop version:

Boom Fantasy currently accepts credit cards, debit card and PayPal for deposits. I was able to test it with a $1 deposit no problem, and the system never stopped me when inputting much higher sums. There may be a maximum deposit amount, but I have not been able to find it.