In December 2019, DRAFT announced it would stop hosting fantasy contests at the end of the year in order to merge into the FanDuel daily fantasy platform.

Existing DRAFT customers may transfer their account balances to FanDuel (and claim a 10% transfer bonus while doing so) to stay in the action. Players who enjoyed the snake drafts offered by DRAFT, fear not. FanDuel promised to integrate DRAFT-style contests onto the FanDuel platform in 2020.

Draft.com is a daily fantasy sports site that breaks away from current trends by doing away with the salary cap model in favor of a more traditional snake-draft style picking system. Rather than working with a virtual salary and drafting a team based on player costs, you and your opponents take turns picking players for your teams. 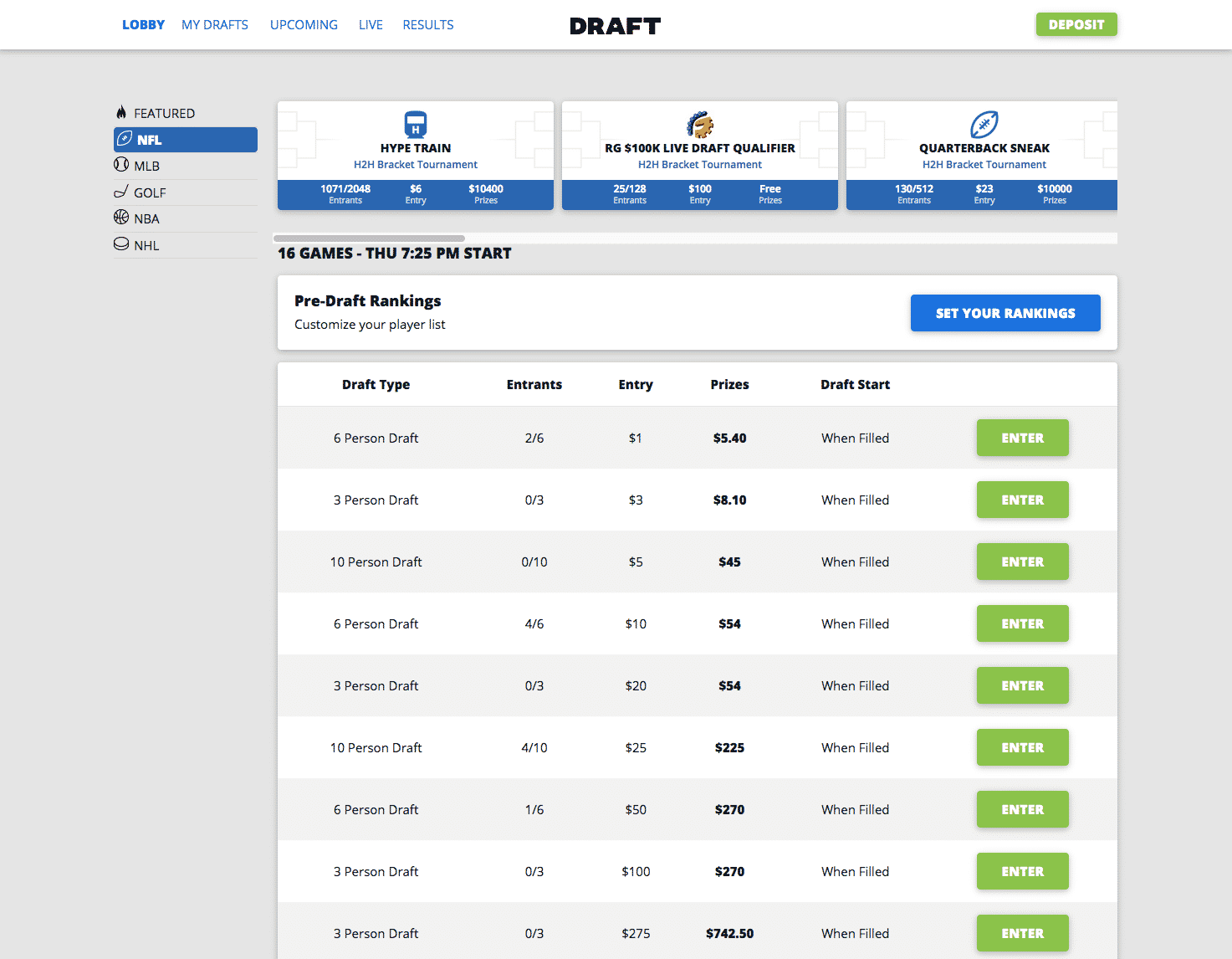 Draft.com offers snake-style draft games with daily and season-long contests available. With an emphasis on convenience and a strict "one entry per player" rule on all contests, DRAFT is a good choice for casual players.

DRAFT was originally developed as a mobile-only game with an emphasis on convenience for players. The emphasis today remains on keeping things simple and easy for mobile users, but DRAFT now has a website interface that makes it available whether you’re on the go or sitting at home in front of the desktop.

We first became aware of DRAFT back when it was launched as a mobile-only offering under the name PlayDraft.com. We didn’t hear much from the people at DRAFT for several years afterwards, but then the company hit our radar again in 2017 when it was announced that international gaming giant Paddy Power Betfair had acquired PlayDraft. It was around this time that the company also moved from the original PlayDraft.com domain to DRAFT.com.

DRAFT CEO Jeremy Levine reported at the time that the acquisition of DRAFT by Paddy Power Betfair allowed the company to increase its marketing spend by as much as 100x compared to the previous year. What was once a relatively small player in the DFS game was given a chance to become a serious contender in the compeititive DFS industry.

As it stands, DRAFT remains a smaller daily fantasy site with most contests involving 2-10 players. A few of the larger contests do attract several hundred players while the largest season-long head-to-head tournament available at the time of this writing had room for 2048 entrants, but overall DRAFT is much smaller than the likes of FanDuel and DraftKings with their biggest contests involving hundreds of thousands of entries.

The majority of the contests hosted at DRAFT use a snake-style system in which you and your opponents take turns drafting players for your teams. Once a player has been picked, that player is removed from the pool and no one else may select that same player.

The first pick advantage is alternated between each contestsant across each round. If you pick firt in the first round of a head-to-head contest, for example, your opponent will get to pick first in the second round.

You also have the option to create a queue of preferred players and rank others according to your own preferences. This is a useful option because it protects you in case something prevents you from making a pick within the 30-second time limit for each drafting round.

If you are away from the computer or phone and the contest begins, DRAFT will use your queue to make picks for you. If you don’t have a queue, DRAFT will look for your own rankings and try to pick the player you have ranked the highest for that position. If you do not have a queue and have not ranked any players, the system will auto-draft the player with the highest projected point total for that position.

Not all contests follow this exact format, but that’s the basic idea behind DRAFT. Here’s how each of the contest types is organized and played at Draft.com.

Head-to-head contest pit you against a single opponent with a snake-style draft. You each take turns picking first as the draft rounds progress until each of you has a full team comprised of players participating in that week’s games.

You can play in public head-to-head games against anyone and everyone or create private games to challenge your friends. Public games give each of you 30 seconds to make each pick while private games give you an untimed option (which becomes timed when the first game of the day is one hour away).

Multiplayer contests work in the same basic manner as head-to-head contests but with more players. These contests are also played in the snake draft format with each player taking turns drafting first. If you pick first in one round, you will pick last in the next round.

The simplest contests of all at DRAFT are Dream Team games. In these, each participate selects five players with no salary cap or snake draft rules. You simply pick any five players you want and begin the game. Players are not removed from the player pool when selected, which means you and your opponents may draft the same player(s) for your teams.

Head-to-head bracket tournaments combine daily fantasy with season-long fantasy by lasting multiple weeks but still allowing you and your opponents to draft new players each week. In these contests, the field is cut in half each week through head-to-head contests.

Each week, you are matched with one other player to compete in a snake-style draft contest. You and your opponent take turns making your picks and then pit your teams against one another for that week’s games. The loser of each head-to-head matchup is eliminated from the tournament while the winner moves on to the next round.

For eample, round 1 of an NFL head-to-head tournament may begin with 2,048 players. After that weeks’ NFL games are completed, 1,024 players will move on to compete in another round of head-to-head contests the following week. That group is once again cut in half, with 512 players moving on.

This weeding-out process continues until just two players remain and compete in one last head-to-head contest to determine the 1st and 2nd place finishers.

DRAFT offers a simplified version of season-long fantasy football called Best Ball. In a Best Ball contest, you begin the NFL season by drafting a team of 18 players before the Week 1 games get underway.

Once you have a team of 18 players, the contest begins and your top-scoring players will be automatically started each week. From Week 1 through Week 16, you do not need to do anything else other than watch the games and check your ranking on the season-long leaderboard. There are no waivers, no trades and none of the other hassle that comes with traditional season-long leagues.

If you do not want an easy contest, look for the games marked with the red “E” icon next to their names. The difficulty level in these games is turned up a notch by deactivating the top projected players in each position, making those players undraftable.

Removing the top players from each position removes most of the obvious picks and therefore makes this a more challenging format for everyone. If you believe you have more knowledge than just about anyone else when it comes to a specific sport, these games will give you a chance to put yourself to the test and possibly gain an even bigger edge over the competition.

Beginner games are the opposite of expert contests – these are limited to players who do not have a long history on DRAFT.ocm. Look for these tournaments after you join Draft.com to get a taste of the games against lesser competition.

You can fund your DRAFT account with PayPal, credit card and debit card. The credit and debit card options send you to the PayPal website as well, but you do not need a PayPal account – you can just check out as a guest.

Withdrawals are processed back via PayPal, credit/debit card and check. Speeds vary, but PayPal withdrawals generally take up to 48 hours, withdrawals back to a credit or debit card take about 3-5 days while checks in the mail take about 7-10 days.

The following scoring rules show how your lineup earns points based on the play of each player on your lineup. Overall, the rules at DRAFT are similar to the rules used at other fantasy sites. If you have experience anywhere else, none of this will look too foreign.

DRAFT offers a unique experience for fantasy players and is financially stable due to the backing of one of the largest gaming companies on the planet (Paddy Power Betfair). These facts alone make it worth checking out – especially if you’re starting to get a little burned out on all those salary cap games hosted by the competition.

DRAFT is also worth a look for players new to DFS because it is not full to the brim with sharks. Unlike the other major fantasy sports sites, DRAFT does not allow multiple entries into a single tournament.

When you play in contests here, you play against individual players, one lineup at a time. If you compare this to other major fantasy sites where expert players buy into individual contests hundreds of times with dozens of different lineups, you can see why DRAFT might be preferable for new and casual DFS players.

A simple and intuitive interface whether you’re mobile or on the deskopt also helps to make this site friendly to the inexperience and experienced alike. Once you sign up for an account and visit the lobby, you won’t have any problems finding contests and drafting teams.

The one knock against DRAFT.com is it remains a relatively small DFS site. You’re not going to find the million dollar guarantees here like you will at DraftKings or FanDuel. This is a site where you play in smaller contests with smaller prize pools, but with a much better chance to actually win real money.