Tradesports is an up-and-coming sports betting exchange that plans to launch in regulated states over the course of 2020 and beyond. The company and its founders actually have a long history in the US but are returning to the market once again now that sports betting is legal in a growing number of states.

Bonuses to be announced 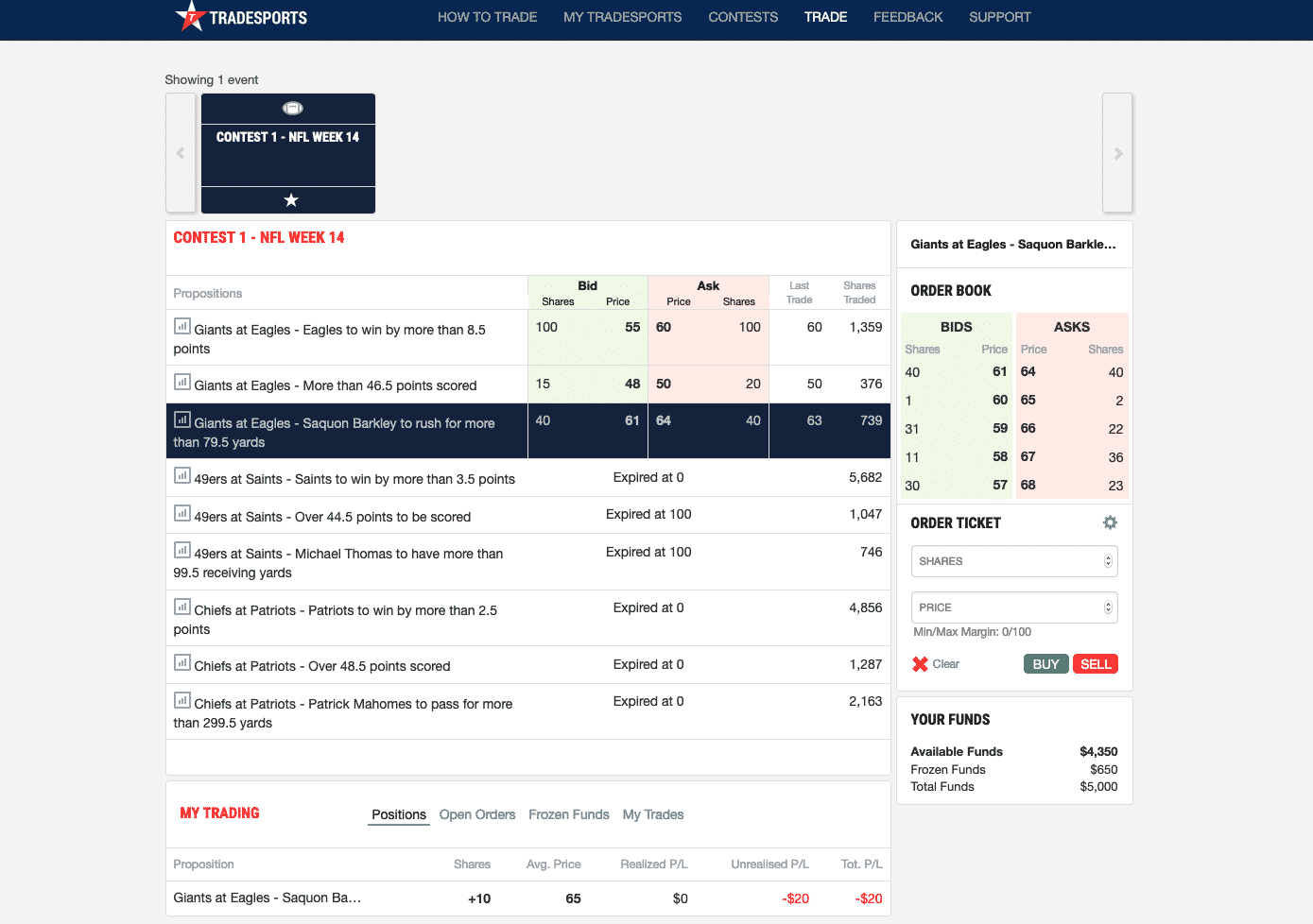 Tradesports is a legal betting exchange that allows customers to buy and sell shares that are based on sporting outcomes. For example, you can buy shares in the Patriots winning their next game and then sell when the Patriots win or even when they just get ahead to lock in a profit.

We will get into the history of the company shortly, but the key thing to understand is that Tradesports is not your typical sportsbook with fixed odds wagers that are placed against the house. Tradesports is a betting exchange in which all wagers are placed with/against other users.

For every wager you place at Tradesports, there is a user on the other end taking the opposite side of that wager. It works like a stock market with users setting the odds (prices) they wish to offer or take, and prices fluctuating in real time in response to market forces.

Additionally, the term “wagers” is a bit misleading. What you’re really doing at Tradesports is taking positions, buying and selling predictions-based contracts that fluctuate in value as the game progresses.

If you think the Raiders will beat the Broncos this weekend, you might log on to Tradesports and buy shares for the Raiders to win at $3.50 each. If the Raiders go on to win, those shares settle at $10 and you net a profit of $6.50 per share. If the Raiders lose, you lose your initial investment.

Also note that you do not need to keep your shares until the end of the game. Tradesports is a dynamic betting exchange. If the Raiders get up by a couple of touchdowns at the half, you might be able to sell those shares immediately for $8.50 each to net a quick $5.00 profit per share.

If you have any experience with trading through platforms such as TD Ameritrade, you will feel right at home with Tradesports. If not, that’s fine too. The concept of exchange betting is definitely a bit different for those who have only bet on sports via traditional sportsbooks, but it is not terribly complicated once you get past the initial learning curve.

At the heart of Tradesports are shares, or contracts based on sports that result in one of two possible outcomes: YES or NO.

For example, each of the following propositions would either end in a yes or no:

Picking a Side and Making a Trade

Now, imagine you think the Giants will indeed beat the Eagles by a touchdown or more. You could buy shares in that outcome at current market prices (or set your own price and see if there are any takers).

Let’s say shares on the Giants to beat the Eagles are trading at $4.50 apiece and you decide to purchase a few shares at that price. If the Giants go on to win the game by more than 6.5 points, those shares would settle at $10 and you would net a profit of $5.50 for each share you had on that outcome.

Remember, there is no need to keep a share until the underlying proposition has been settled. If the Giants go up by a touchdown at any point and prices on each share move up to $6.50, you can sell those shares right then and there to book an immediate profit of $2.00 per share.

One important thing to keep in mind is that for every trade you make, there is another person on the other side of that transaction. When you’re buying shares, someone else out there is selling them to you and taking the opposition position.

Thus, the Tradesports exchange functions like a stock market. Buyers and sellers set their prices, and whenever someone meets in the middle, a trade is made. Prices are constantly fluctuating as the game progresses and as more information becomes known.

If you think a proposition will not happen, you can take the opposite side by selling shares, even if you don’t already own the underlying shares. This is called short selling.

For example, imagine you think the Giants will not beat the Eagles by more than 6.5 points. In that case, you could short sell shares on that outcome.

All you need to do is enter an order to sell those shares. Your account will be credited with the current value of those shares, but you will also go negative that many shares. Later, you will need to buy those shares back to close your position.

To continue our example, you think the Giants will not beat the Eagles by 6.5 points and so you decide to short sell 10 shares at $4.50 apiece.

Your account will be credited with $45 and you’ll go negative 10 shares.

For the sake of simplicity, let’s say you decide to keep that position until the end of the game (remember, you can buy and sell during any game as well).

Assuming you keep that position until the end of the game, there are two possible outcomes:

The people behind Tradesports are not new to exchange betting or the US market. Tradesports co-founder and CEO Ron Bernstein first got into the business as one of the original cofounders of Intrade, an online predictions market that launched in 1999.

Intrade originally offered sports predictions markets just like Tradesports does today but changed its focus to geopolitical events to stay on the right side of US law. Intrade was based out of Ireland at the time, but much of its customer base was in the US and company leadership wisely opted to comply with US law.

The business itself proved very popular and received approvals from US regulators. The 2008 and 2012 elections brought Intrade to the national spotlight with its accurate predictions of many statewide elections powered by its trading markets (“the wisdom of the crowd”).

The death of one Intrade founder in 2011 followed by a series of regulatory crackdowns would eventually cause Intrade to cease operations in 2013. Tradesports co-founder Ron Bernstein penned an excellent op-ed for Fortune back in 2014 detailing the rise and fall of Intrade. Give this story a read if you’d like to get a sense of the passion and perseverance Bernstein has for the business.

Just one year later, Bernstein was back in action and seeking to take advantage of the rise of daily fantasy sports in the US. Bernstein co-founded Tradesports.com in 2014 to host fantasy contests in which users were given virtual bankrolls that they could use to buy and sell shares in sports predictions. The winners who grew their bankrolls the most in any given contest were rewarded with cash prizes.

The fundamental idea was the same, but Tradesports had wrapped the trading platform into daily fantasy contests to take advantage of favorable regulations in the US. However, the fantasy/trading combination never took off to the same extent as the original Intrade and Tradesports closed after about 18 months in business.

The relaunch began with Tradesports hosting a series of free-to-play fantasy style contests running from late 2019 to early 2020. This time around, though, the fantasy contests were simply offered as a way to acquaint players across the country with exchange betting ahead of its planned real money launch in the US.

Tradesports has confirmed it will be seeking to enter states with legal online sports betting beginning in 2020. The company has not detailed which states it is considering first, but we can assume any or all of the following states will be under consideration moving forward:

One of the key challenges Tradesports will face going forward is one of liquidity. Unlike traditional sportsbooks, a betting exchange needs customers on-site, trading and exchanging shares in sports predictions for the concept to work.

Thus, we imagine Tradesports will be looking closely at the most populous states with laws conducive to online betting. New Jersey, Indiana, Colorado, Tennessee, Michigan and Pennsylvania stand out as potentially strong markets due to having favorable laws that allow customers to sign up for accounts remotely.

Tradesports must also take the Federal Wire Act into consideration. Under the Wire Act, wagers are prohibited from crossing state lines. This means all betting pools must be segregated at the state level. That means customers from New Jersey cannot buy shares from customers in Indiana, for example.

For as long as the Wire Act remains a hurdle, Tradesports will likely look to target the most populous states in order to provide liquidity to its markets. A large customer base will be critical for the ongoing success of Tradesports.com.

Tradesports launched free-to-play fantasy style contests in late 2019 but has not yet released any details on bonuses or promotions when it goes live in regulated states. We are likely to see promotions of some sort, but what form those will take remains to be seen.

On one hand, the unique nature of Tradesports as the first sports betting exchange to launch in the US (aside from a horse racing exchange run by Betfair NJ) may render large bonuses unnecessary to attract new customers.

On the other hand, Tradesports management may decide to host additional free contests to introduce the concept of exchange betting, which does come with a higher learning curve than traditional betting.

In any case, we will update our Tradesports review as more information becomes known.

The unique Tradesports approach to sports betting is an advantage in itself just because it is so different compared to other sportsbooks, but there are also three advantages in particular that stand out.

First, Tradesports takes less commission than the average sportsbook. While other sportsbooks keep something in the range of 7-8% commission, Tradesports will offer customers a better deal with commissions in the 3-4% range.

Second, Tradesports offers greater flexibility. This is not a “place your bet and hope for the best” sportsbook. Tradesports positions can be traded endlessly until the final whistle as long as there are other traders out there willing to buy into your position.

Is the game not going well? Sell your stake now and cut your losses. Is the game going well, but you don’t want to risk watching your team choke in the fourth quarter? Close your position now to lock in your gains.

Third, Tradesports is a peer-to-peer form of sports betting. You are not betting against the house with the odds hopelessly stacked against you. Shares are bought form and sold to other traders just like you. Tradesports itself has no stake in the outcome of any wager; it simply keeps a small commission no matter the outcome. This also means you are much less likely to be limited or cut off just because you’re a winning bettor.

There are two potential disadvantages to doing your betting with Tradesports.

One potential disadvantage is the fact that Tradesports relies on liquidity to provide betting markets. With the Wire Act forcing Tradesports to maintain separate liquidity pools for each state, it is possible Tradesports will have trouble matching your orders with other traders.

Tradesports provided an automatic market maker to provide liquidity during its initial beta contests, but we do not yet know what plans Tradesports has in place for its real money launch.

The other potential disadvantage is related to the learning curve. If you’re new to exchange betting and have no experience in trading, Tradesports will take a little time to learn. It’s not that bad once you give it a test run yourself, but it is still not quite as simple as logging in to a traditional betting site and placing wagers against the book.