As the summer season rolls along, football season is inching ever closer. We are just a few short weeks away from weekends that will be jam-packed with NFL and NCAAF games as far as the eye can see.

Wouldn’t it be great if there was a quick and painless way to get a handle on the upcoming season? Good news. There is, and it’s available at your fingertips.

There is a very active futures market for both the NFL and College Football. So, what are futures?

These are NFL wagers you can place on future events such as championships, win totals and so on. Futures can cover a wide range of event types, but generally involve longer timelines than standard pre-game wagers. For example, there are already odds listed for the winner of Super Bowl LIV, even though that game isn’t set to kick off until February 2, 2020.

The same holds true for the winner of next year’s College Football Playoff national championship game. Drilling down even further, there are odds for conferences and divisions, as well as regular season win totals for individual teams.

So how can you take this information and use it help you prepare for the upcoming season? We’re going to take you through it step-by-step.

Start at the Top and Work Your Way Down

There is all kinds of information to be gleaned from the futures markets. Each of the 32 NFL teams will have odds attached for their chances to win the Super Bowl, as well as their respective conferences and divisions.

There are also regular season win total estimates to be found, with the idea being that bettors will place wagers on going over or under the benchmark number.

The same holds true for each of the 130 FBS programs in college football. Odds run the gamut from national title odds all the way down to individual win totals.

While there are plenty of different ways to sort through all of this information, I prefer a “top down” approach. That means we start with the odds for the NFL and NCAAF title tilts and work backwards. 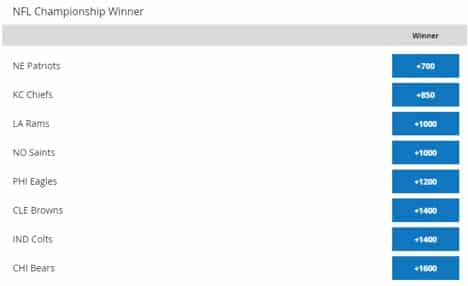 The eight teams with the most favorable odds are listed up above. Last year’s final four teams are expected to be really good again, and there are four intriguing contenders right behind them. Interestingly, four of the above teams are from the AFC, while the other four are from the NFC.

Said another way, we have just found the four teams from each conference who are technically favored to make it to the divisional round of the NFL Playoffs. Quick and easy, right?

It works in the other direction too. So which teams look like they’ll be battling for the right to pick first in next year’s NFL Draft? Here are the five teams with the worst odds on the board to reach next year’s Super Bowl.

In between the Super Bowl contenders and the also-rans of the league are the league’s other 19 franchises and their odds to reach the big game. While the futures market is far from perfect, it can help you get a handle on reasonable team expectations for the coming year.

We Can do the Same Thing for Conferences and Divisions

After we have a handle on where all the teams stand on a league-wide basis, the next step is to drill down into the conference and division level. This works for college as well.

For example, let’s say you’re a devoted Big Ten fan who doesn’t pay much attention to the dozens upon dozens of other weekly games. You can quickly gauge the strength of all teams in the conference – or at least the current perception of it – by taking a gander at the odds to win it. 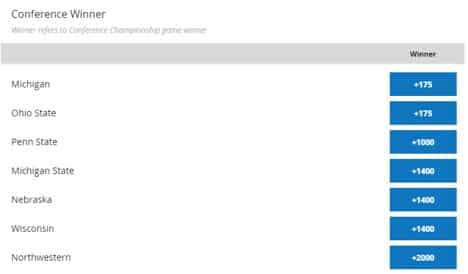 That’s the first half of the odds up above. Unsurprisingly, the conference is expected to come down to Michigan or Ohio State. Both of those squads are among the favorites to reach the College Football Playoffs as well, so that certainly makes sense.

Behind those two teams, we find some interesting nuggets of information. Penn State projects as the third-best team in the conference, and we would imagine they’ll be ready to pounce if either of the big two stumbles.

Nebraska is among three teams with odds of +1400. While that may not seem too earth shattering, it’s useful information when we consider that the Cornhuskers were only 4-8 last season. This squad is expected to take a leap forward in 2019.

Now let’s take a look at the three programs at the bottom of the barrel in terms of odds to win the conference.

These three teams are expected to bring up the rear in the conference standings. If you’re a fan of one of the powerhouse Big Ten schools that has one or more of the above teams on the docket this year, you may want to pencil in a victory.

What’s a Good Expectation on Individual Team Performance for the Coming Year?

When looking at a team’s schedule for the upcoming season, it’s perfectly natural to attempt to figure out games which look like potential wins and those that could wind up in the loss column.

Beyond being a fun exercise, it also helps to give you a sense of what to expect from the team this year. But are your expectations spot on or are you missing something?

The futures market can provide the answer. Let’s say you’re a big fan of the Patriots. You’ve gone through the schedule and feel confident that the team can win at least 10 games. Here’s what the futures market says.

The benchmark projection is 11 wins, so the upcoming season could be even better than you were anticipating. So, what about the teams that are looking like 2019 will be a rebuilding year?

The futures market can help you gauge exactly how painful the year may be for those squads. On SugarHouse, the Cardinals have the least favorable odds to make it to the Super Bowl. Here’s what that translates to in terms of wins and losses.