FantasyDraft.com opened in 2014 and has grown to become one of the bigger sites in the daily fantasy industry. It still faces stiff competition from the likes of FanDuel and DraftKings but offers a unique take on DFS that just might prove quite tempting to regular DFS players.

In July 2019, FantasyDraft unleashed a totally new model to become the first rake-free fantasy site. Rather than charging rake like every other mainstream DFS site, FantasyDraft.com works on a subscription model with fixed monthly costs. This means you pick your plan, pay a monthly fee and never pay rake again. 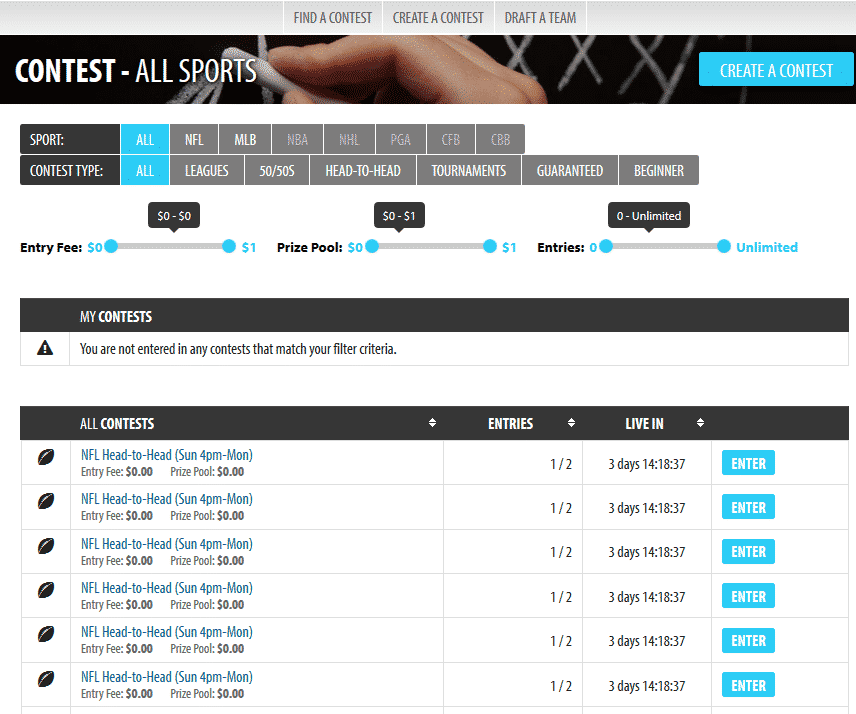 Fantasy Draft opened for business in 2014 and has grown quickly since then thanks to an awesome refer-a-friend program. More importantly, the competition here is quite a bit softer than your average DFS site and FantasyDraft uses a subscription model to offer rake-free contests.

The subscription plan is attractive for two reasons. First of all, it’s probably quite a bit cheaper over the long run than paying rake on every contest you enter. As the FantasyDraft homepage notes, rake can eat up as much as 30% of an average player’s bankroll over time. This also means FantasyDraft pays back 100% of all contest entry fees to players in the form of prizes.

Second, the subscription plan is a fixed cost that you can know and account for. As a player, you know exactly how much it’s really costing you to play in all those contests and you can much more easily track your results.

Rake is a clever way for fantasy sites to turn a profit because it’s on not as obvious as charging a flat monthly fee, but it adds up quickly. The Fantasy Draft model is transparent and easy to comprehend. There are numerous plans to choose from (detailed below) and plans can be swapped out any time.

Moving beyond the subscription model, FantasyDraft is at its core a normal daily fantasy site. You get your virtual salary, draft players for your team and accumulate points based on your athletes’ real-world performances. Score more points than the competition to win the league and a cash prize.

FantasyDraft does indeed offer rake-free fantasy contests as advertised, but those have been replaced with two other costs. First are the various subscription plans as detailed below. Second, all deposits are now subject to a 3% “processing fee.”

It’s not free, but choosing the right plan can potentially save you quite a bit of money over the long run. Here are the seven plans players can choose from:

When you sign up for a FantasyDraft account, you’ll be asked to select one of the above plans. If you’re new to DFS or aren’t sure how much you’ll really play, the Playersfirst plan is an easy first choice. This one will cost you absolutely nothing and it will waive up to $100 worth of entry fees every month.

To be clear, you will still pay to enter costs under any plan – you’re just not going to be charged any rake. This means if 10 people join a $10 contest, the total prize pool will be the full $100 as all winnings are now paid back to contestants. Likewise, 50/50 contests actually pay a full 2x your entry in winnings to the top 50% of the field.

You can also adjust this as you go to better tailor your plan to your needs. If you log in to your FantasyDraft account, visit settings and enable “Show Entry Fees Paid,” you can then go to your My Contests page to see how much you have paid in rake so far. With this, you can see how quickly you’ve been going through your monthly allotment of waived fees and adjust your membership plan accordingly.

FantasyDraft.com offers a free $4 entry ticket with your first deposit. After you sign up for an account and make a deposit, you’ll get entry to a $4 contest of your choice.

Joining a Contest and Drafting a Team

The main lobby is where you go to join contests and draft teams. This part of the website is organized in a pretty straightforward manner. You can filter the games by league, contest type, entry fee, prize pool and number of entries allowed.

When you see a contest you like, click on its name and a summary will appear that shows all the details. You’ll see the payout structure, list of games included in this contest, a list of entrants, scoring rules and start date. Click on the blue “enter” button if everything looks good.

Now it’s time to draft your team. In the NFL, you get a salary of $100,000 that you can use to draft 9 players. Each player is priced according to his perceived strength, average number of fantasy points earned and so on. The rules for NFL games are that you remain within the salary cap, you fill all 9 positions, you draft players from at least 3 teams and that you have fewer than six players from any one team.

Click on the arrow next to any player’s name to add that player to your lineup. As you add players to your team, the roster will update itself to show how much salary you have remaining and the average amount you have left to spend on each player.

You can also click on any player’s name to see a summary of that player. The summary displays that player’s stats for the season, average number of fantasy points scored, how that player looks against the upcoming opposing team and recent news for that player.

FantasyDraft.com has a standard lineup of contest types. All contests are hosted in the salary cap format but there are differences in how many entries are accepted and how payouts are awarded.

Leagues: The leagues accept anywhere from 3 to 20 players. Payouts are awarded as either “winner take all” or with payouts for the top few players. You can join leagues created by other people or host your own with custom rules for size, entry fee and number of paid places.

Tournaments: Tournaments are just like leagues except bigger. The biggest tournaments accept thousands of entries and pay out significant, life-changing amounts of money to the top performers. If you want to try to strike it big, tournaments are the way to go.

Head-to-Head: A head-to-head contest pits you against exactly one other person. Whoever ends up with the most points wins the entire prize pool.

Beginner: Beginner contests are for the rookies of FantasyDraft. These contests are only open to people who have participated in fewer than 60 contests.

Guaranteed: Guaranteed contests publish a prize pool in advance and run no matter how many people enter the contest.