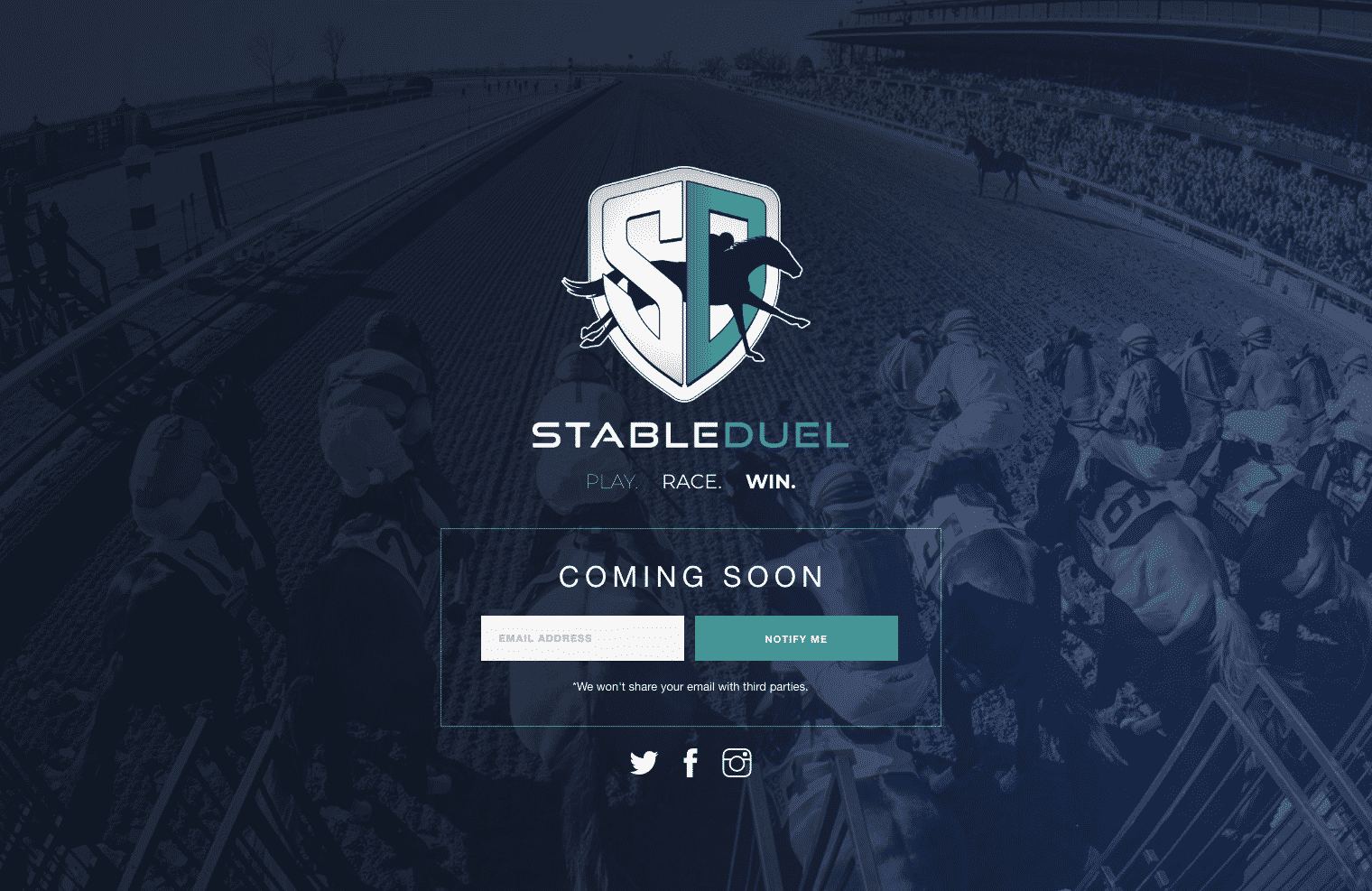 StableDuel is a horse racing fantasy site in which players draft a "stable" of horses for the day and earn points based on their horses' performances in their races. The players with the best-performing stables win real money payouts.

The high production quality of the teaser videos and overall polished presence on social media was enough to catch our attention and prompt us to do some digging. Almost no official information has been released to date, but we have been able to unearth some details giving us a look at what StableDuel just might have in mind.

What we’ve found in our research looks particularly interesting for horse racing fans, so we’ve put together an early StableDuel review to share what we know. Actually, it might be fairer to call this a preview at this point given the lack of official information we’re working with right now, but we’ll transition this page over into a full-fledged review as we find out more.

What We Know About StableDuel

Our first introduction to StableDuel was this teaser video released on Facebook, Instagram and Twitter in October. The video is painfully short on details, but what we can glean is a new betting and/or fantasy horse racing product is in the works.

Here’s what they posted on Twitter to announce the pending launch of StableDuel:

The StableDuel social media accounts indicate the company is based out of Lexington, Kentucky and a Google search indicates Chris Brothers is the cofounder and President of StableDuel.

This appears to be the same Chris Brothers who also serves as President of Xavier International Bloodstock, which is a horse racing advisory service based in Lexington that provides services such as horse appraisals, pre-sale inspections, racing partnerships and more for those involved in horse racing.

If this is indeed the same Chris Brothers, then we know StableDuel has an experienced and connected person running the show. Chris Brothers has a long and apparently successful career in horse racing, and he seems to know the industry well from his position as a longtime insider.

A Google search revealed a patent filing for StableDuel that sheds some light on what they plan to offer. The patent is fairly technical in nature and numerous details remain unclear at this point, but what we can gather is StableDuel will combine fantasy sports with parimutuel betting to create a competitive product with payouts based on actual horse races.

The patent explains that customers will be given a fixed virtual salary that will be used to draft a stable of horses for the day’s races and that horse salaries will be determined by pre-race odds. Most likely, this means horses that are priced as favorites to win will be given higher salaries than longshot horses.

Thus, customers will have to balance their picks between affordable horses that are less likely to win with more expensive horses that are likelier to win in order to stay within the salary cap. For example, an even money favorite in a race will cost significantly more than a 20-1 longshot.

The goal of the players in StableDuel contests will be to draft the most effective stable of horses for that day’s races while staying within the virtual salary cap. As the day’s races take place in the real world, players’ stables will earn points based on their horses’ finishing positions and margin of victory.

Before we get into the specifics of StableDuel’s scoring system, we would like to stress again that none of this has been officially confirmed by StableDuel. Everything we have right now is based on our own research and the patent filing linked-to above.

An example a StableDuel fantasy contest found in the patent filing walks us through the entire process of drafting horses, how points are earned for a player’s stable and how payouts are determined. From this example, we have an early preview of how horse racing contests at StableDuel may work.

In the example found in the StableDuel patent, each player starts with a virtual $50,000 salary and then uses that salary to add horses to the stable. It appears the system will have players pick one horse from each race for that day’s card.

In the example, the player picks Race 1 runner Songbird (7-5 odds) at a price of $9,700 to leave the player with $40,300 in remaining salary. The player then moves on to Race 2 to make another pick, Race 3 to make a third pick and so on for all of that day’s races or until the player runs out of remaining salary.

It appears horse salaries are determined by their pre-race odds. A figure included in the patent filing shows prices based on odds as follows:

How Points Are Calculated

Continuing the example, StableDuel shows a sample past performance card from a recent race.

In the example, Songbird finished in first place and won by a margin of 5 ¾ lengths.

StableDuel awarded Songbird 60 points for finishing in first place plus 5.75 points for the margin of victory. So, that shows us that horses will be assigned fixed point totals based on their finishing position plus or minus a number of points equal to the winning margin. In this case, winning by 5 ¾ lengths translated into an additional 5.75 points.

Meanwhile, a horse called Cavorting finished in 4th place and was 3 ¾ lengths behind the winner. This horse received 20 points for finishing in fourth, but was deducted 3.75 points for trialing the winner by 3 ¾ lengths to give Cavorting a final total of 16.25 points.

Here’s a look at the scoring system StableDuel will likely use to award points to horses:

The first place winning always receives 60 points plus 1 point per winning margin in length while all other horses earn the point totals listed above minus 1 point per length behind the winner. Fractional points are awarded or deducted such that a winning margin of 2.5 lengths would give the winner 2.5 points for a total score of 62.5 points.

The StableDuel patent does not go into detail regarding how contest winners are paid, so we’re left with pure speculation on this aspect. If StableDuel functions similarly other fantasy sites, contest winners will receive payouts based on their finishing position from a prize pool consisting of all contest entries.

We can reasonably guess that StableDuel contests will cost a fee to enter. All entry fees will then be used to form the prize pool, and from that winners will be paid based on the final point totals of their stables.

One of the more interesting bits of information we gleaned from the StableDuel patent is a preview of the types of contests the fantasy site may run. StableDuel has already come up with a few creative contest types complete with clever names taken straight from the horse racing industry.