The state’s sports betting industry launched in September and produced some very strong retail numbers. October saw mobile wagering added to the equation, and numbers have gone through the roof.

According to Indiana Gaming Commission reports issued on Friday, after combining for $35.2 million in handle, and $8.6 million in revenue in September (historically one of the strongest sports betting months of the year), the state’s sportsbooks posted the following numbers in October:

That represents increases of more than 160% and nearly 35% respectively.

As is the case in New Jersey, Indiana sports betting numbers are being bolstered by people commuting to Indiana from outside the state to place sports bets, both in-person and online.

In New Jersey it’s New York City residents that are flocking to the Jersey side of the Hudson River. In Indiana its Chicagoans that are making the short trip across the Indiana border to get their sports betting fix.

That’s an advantage Indiana will be able to leverage until Illinois sportsbooks go live.

Mobile Has a Major Impact

As the chart below shows, compared to September, handle was relatively flat across the industry, except at two casinos: Ameristar and French Lick Resort Casino. Those two casinos saw handle skyrocket, and not surprisingly, they were the only two casinos in the state with mobile sports betting for the majority of the month.

DraftKings Indiana (through Ameristar) and BetRivers Indiana (through French Lick Resort) were the first two online sportsbook to launch in Indiana and it’s safe to say that the early returns are impressive. FanDuel Indiana (through Blue Chip Casino) came online closer to the end of the month and still managed to attract more than $2 million in handle.

The next two charts have multiple stories to tell. 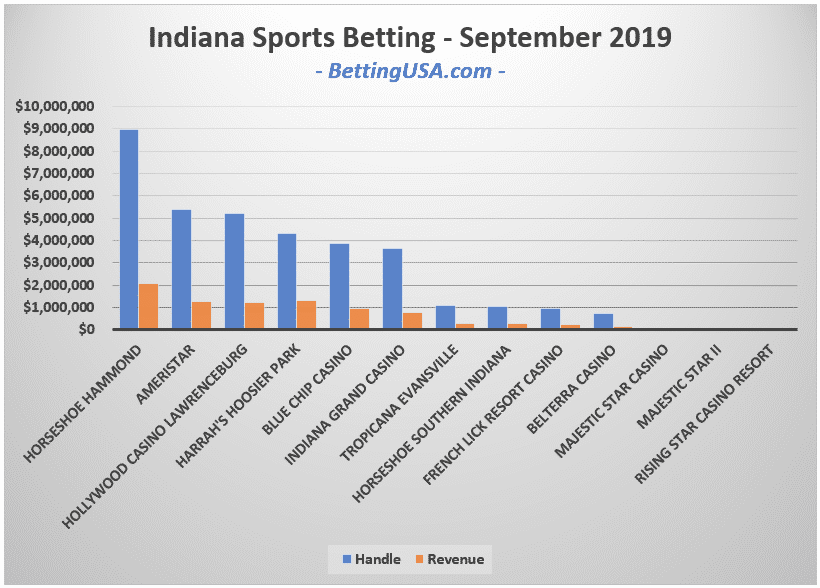 The first thing to notice is how mobile betting shot Ameristar from the trail pack in September, to the runaway industry leader in October. Ameristar and its partner DraftKings accounted for more than 50% of all wagers placed in the state of Indiana.

Second, mobile betting has increased the gap between the haves and the have nots. Ameristar is so far out in front of the other sportsbook operators it almost needs its own chart, and at the same time, some of the handle and revenue bars for the smaller casinos are barely noticeable.

Third, don’t sleep on the other operators yet. Tiny little French Lick Resort Casino bounced from ninth in a ten-horse race to third in a single month. The reason is simple, the launch of mobile wagering through its partner BetRivers.