This column is part of Betting USA’s monthly market analysis and trends in legal US online gambling markets.

Revenue from online casinos has been a hot streak throughout 2019. October 2019 was a lot more of the same.

Here’s a more detailed look at the recent revenue trends in each state.

New Jersey: Growth Is the Name of the Game

According to the latest numbers released by the New Jersey Division of Gaming Enforcement, online casino and poker revenue topped $45 million, and with a similar number generated by the state’s retail and online sportsbooks, the “new” verticals accounted for $91.6 million of the $293.9 million the state’s gambling industry took in. One of the more remarkable aspects of the revenue numbers is the sustained growth of online casino since the launch of online sports betting last summer. You can find four more takeaways from New Jersey’s October revenue numbers here.

As the chart below shows, since the launch of online sports betting in August 2018, New Jersey online casino revenue has been growing at an astronomical rate. Pennsylvania isn’t on par with New Jersey, but as we explained last month, there are several explanations for Pennsylvania’s lag, most of which will get solved over time.

But there is one area where Pennsylvania is outpacing New Jersey: taxes collected by the state. 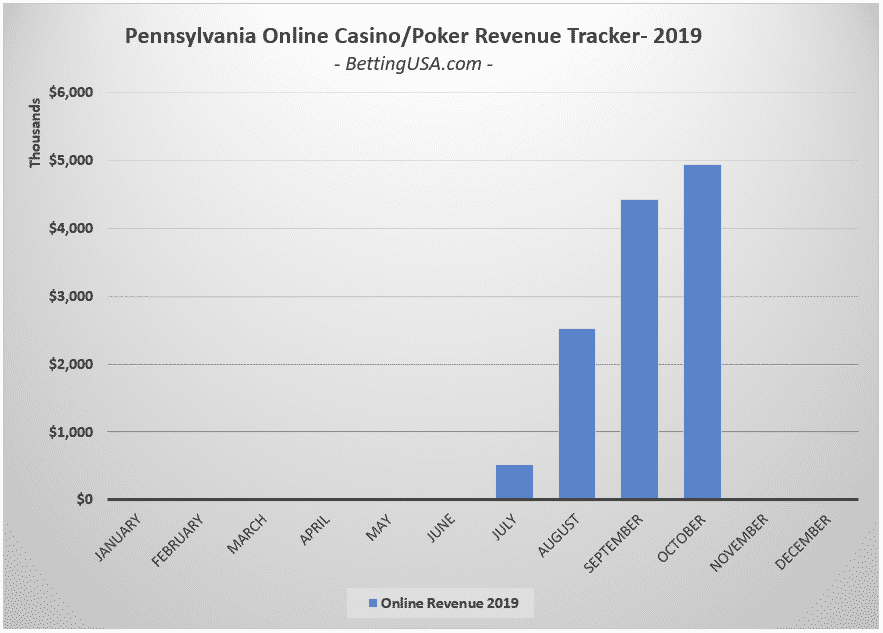 Delaware continues to be the little engine that could.

Delaware’s online gaming industry is constrained by its diminutive population, a lottery-run monopoly, and a tax scheme that makes it difficult for the state’s three racinos to leverage their online gambling offerings.

That said, Delaware’s industry is in a prolonged period of growth, caused by the launch of sports betting in the state.

However, as the chart below shows, growth is slowing now that the year-over-year comps include sports betting months. Steve Ruddock is the content director for BettingUSA and the Editor-in-Chief of Gaming Law Review. Steve has covered the legal and legislative developments in the US gambling sector for more than a decade for online and print publications.